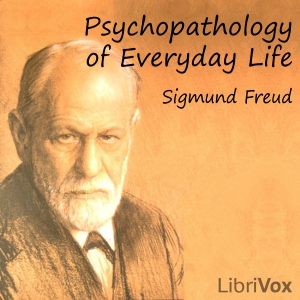 LibriVox recording of Psychopathology of Everyday Life, by Sigmund Freud (translated by A. A. Brill).
Read by Mary Schneider

Professor Freud developed his system of psychoanalysis while studying the so-called borderline cases of mental diseases, such as hysteria and compulsion neurosis. By discarding the old methods of treatment and strictly applying himself to a study of the patient's life he discovered that the hitherto puzzling symptoms had a definite meaning, and that there was nothing arbitrary in any morbid manifestation. Psychoanalysis always showed that they referred to some definite problem or conflict of the person concerned. It was while tracing back the abnormal to the normal state that Professor Freud found how faint the line of demarcation was between the normal and neurotic person, and that the psychopathologic mechanisms so glaringly observed in the psychoneuroses and psychoses could usually be demonstrated in a lesser degree in normal persons. This led to a study of the faulty actions of everyday life and later to the publication of the Psychopathology of Everyday Life, a book which passed through four editions in Germany and is considered the author's most popular work. With great ingenuity and penetration the author throws much light on the complex problems of human behavior, and clearly demonstrates that the hitherto considered impassable gap between normal and abnormal mental states is more apparent than real.

This translation is made of the fourth German edition, and while the original text was strictly followed, linguistic difficulties often made it necessary to modify or substitute some of the author's cases by examples comprehensible to the English-speaking reader. (Introduction to the translation by A. A. Brill)